Best WiFi Password Hack Apps 2020 – It’s nearly impossible to walk or drive through the city without encountering a wireless network.

The problem is most of them are inaccessible to us, especially when we need them.

If you need to connect to a WiFi network in an emergency but it’s secured by a password and you can’t find the owner, you may benefit from knowing how to hack it.

While we don’t condone hacking into networks, knowing how to hack one can actually teach you how to secure yours.

White hat hackers do this all the time as either a hobby or as security testing at their day job. No device is completely secure.

It’s an even harder task to secure or hide WiFi networks because they connect through radio signals which can be spotted or accessed publicly.

However, there are different measures such as a WPA2 that can encrypt traffic.

Trying to piggy-back on other people’s WiFi networks without them knowing isn’t the only reason why you’d want to use a hacking tool. You might want to test how secure your WiFi connection or network is.

Recommended: How To Manually Check For Windows 7

Or maybe you’re caught in a situation where you need to recover or reset your wireless password but don’t remember it.

If you don’t have administrator rights to the router or device that facilitates wireless access, you can simply hack into it and recover

In this article, we’ll show you the ten best applications you can use to hack into a password protected and secured WiFi network.

Here are the Best WiFi Password Hack Apps For Android

AirCrack-ng is one of the most well-known wifi password hack apps on the internet. It can be used for 802.11a/b/g WEP and WPA cracking. It utilizes some of the best algorithms to recover wireless passwords by gathering and analyzing packets.

Once enough packets have been captured, it tries to recover the password. To make the attack a little quicker, it employs a standard FMS attack with some optimizations.

A key advantage of using this tool is you gain access to online tutorials that the company has made available. These tutorials will show you how to install and use the tool to hack wireless passwords.

Aircrack-ng has been trusted by numerous hackers. It was originally built for Linux but it has since been ported over to Android.

To find more on the installation and setup process, you can visit this site: XDA-Developers

If you’re looking for an application whose installation is a little less complex than Aircrack-ng, you should give WiFi WPS WPA Tester a try. It was developed by Saniorgl SRL.

It’s available on the Google Play Store which is probably why it’s one of the most infamous Wi-Fi hacking tools.

The developer’s intention for creating this application was to create a tool that could scan the vulnerabilities found in a WiFi network.

This app test the connection to Access Points with WPS PIN, which is calculated using various algorithms such as:

Devices that are not rooted can use this application but they will not be able to view the WEP-WPA-WPA2.

This application is only compatible with Android 5+ ROMs. Using a hacking application like this requires a lot of patience because it runs through a bunch of algorithms to find the best way to hack a network.

Just like WiFi WPA WPS Tester, dSploit was also made for the sole intention of searching for vulnerabilities in a WiFi Network.  It is essentially a WIFI penetration testing suite.

This app also helps in analyzing and controlling your network, as well as all other types of information. The app can run on your laptop with the help of an android emulator for pc.

What makes this application better than most is that it not only allows you to hack other people’s Wi-Fi but it also helps in controlling the devices that are connected to the same Wi-Fi network.

Here are the key features that dSploit has to offer:

Although dSploit is rich with features, some users may be put off by how complex it is to use.

The application also hasn’t been updated since 2016. But if you’re patient and willing to learn how to use it, you can open an entirely new world.

Nmap is a multiplatform network security scanner that is available on a multitude of operating systems which includes Android.

It’s used by ethical and white hat hackers to test the vulnerability of a network and see if it can be exploited.

A key advantage of Nmap is that it works on both rooted and non-rooted devices.

Much like WiFi WPA WPS Tester, you get more features on rooted phones as compared to non-rooted ones.

This is a great wifi hacking app for android. This app helps you scan networks and find ports as well as system details.

While it doesn’t have as many features as dSploit, it is powerful and very easy to use.

It’s an open-source application with a pretty decent sized community behind it. This means updates happen fairly often.

Arpspoof was written as a part of the dsniff package. To ensure the continuity and longevity of the application, the developer, Dug Song has made it open source.

This means anyone can have access to the source code and can add to it.

This app is primarily written for network auditing. The app functions on a simple mechanism.

What it does is it redirect the packets on a local network by broadcasting spoofed ARP messages.

Arpspoof also displays the packets that the exploited networks are sending to the device, but it doesn’t save them.

Arpspoof tries to redirect the traffic found on a local network with the help of a mechanism called “Faking ARP replies”. It polls them and returns them to a specific network or to all the hosts found.

The downside of Arpspoof is that it has a very outdated user interface. If you can get past it, it’s definitely a very useful tool.

Kali Linux is one of the most popular Linux Distributions for ethical hacking and network security testing.

It was founded by Mati Aharoni and is currently maintained by Offensive Security PVT. Limited.

What makes it special is that this is the first open-source android penetration testing platform. To use Nethunter, you need to launch Kali’s Wi-Fi tool.

Nethunter has a simple configuration process. It needs a custom kernel, which supports 802.11 wireless injections. This makes Kali Linux Net hunter a must-have tool for hackers.

A major downside is that the kernels which are provided with Android Phones by default don’t support 802.11 wireless injections, so unless some Android Developer for your phone develops a custom kernel with the aforementioned requirement, you can’t use this tool.

However, there is a list of Android Devices which are officially maintained by Offensive Security for Active Development in Kali Nethunter.

Wi-Fi Inspect is a multi-tool intended for Computer Security professionals, Ethical Hackers, and other advanced users that wish to have control and monitor the networks they own or have the permission to control over.

It’s a little less of a hacking tool than it is a WiFi security audit tool. This application requires a root.

Wi-Fi inspect is similar to apps like Wi-Fi kill and NetCut but its user interface is one of the best.

It can search for you how many people are connected to a network and you can check their IP and what devices they are using to connect.

You can also block them from connecting to the network, directly from your app. It is so fast that in a few seconds you get the complete list of the users.

The design is so simple and refreshingly user-friendly. We can’t help but praise the user interface design.

It also supports a long list of languages. The app is able to detect whatever device is connected to your network whether it is a TV, laptop, Mobile, PS, XBOX, etc.

It also informs you of the MAC address and the Manufacturer of the devices connected.

If it doesn’t work, then make sure you have successfully allowed it to gain root access.

zAnti, from the house of Zimperium, is a widely used mobile penetration testing/Hacking toolkit for android that helps you find how vulnerable your WIFI network is.

The app’s interface is simple and beautifully fluid. zANTI Penetration Toolkit is very easy to use because of its simple user interface and thus it enables IT Security Administrators, Ethical Hackers and other types of users to simulate and find out an advanced exploit that could possibly gain access to the network.

It allows security managers to analyze risk levels in a network. It can be used for WiFi network assessment and penetration.

Its WiFi scanner shows the access points with a known default key configuration in green.

You can also use the app to kill connections to prevent the target to access any website or server.

By mirroring such methods used by cyber attackers, you can identify the holes in your network and make amends.

Reaver for Android, aka RfA, is a WiFi password hacker app which we can be used to figure out the password of different WPA WiFi networks.

It ships with monitor-mode support that can be activated and deactivated at any time. Reaver detects WPS-enabled wireless routers on its own.

With its GUI, all the Reaver settings are available. This WiFi hacker app launches a brute force attack against WPS registrar PINs and recovers the WPA/WPA2 passphrases.

It has been tested on a wide variety of devices, Reaver is able to get the target AP’s plain text WPA/WPA2 passphrase in 2-5 hours.

In addition to all of this, Reaver for Android also supports external scripts. 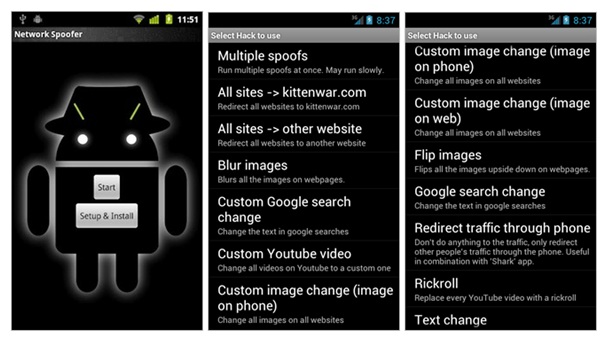 Similar to apps like dSploit, Network Spoofer lets you change websites on other people’s computers or phones or any other internet accessing device from an Android Phone.

This is not a WiFi Password Hack App, but it is a spoofing tool. It Has an inbuilt free VPN app for android which will help you surf anonymously too.

After downloading it, all you have to do is simply log onto a Wi-Fi network and select a type of spoof to use and then press start.

The application is licensed under GNU GPNv3, this mobile application runs on rooted devices with ease. You can also use custom firmware like CyanogenMod to use this app.

Some of the major features of this app include the ability to redirect websites to other pages, deleting random words from websites, changing all pictures to troll face, etc.

The tools and apps mentioned in this article are for educational purposes. We do not condone malicious hacking and exploitation.

Hacking or trying to cracking through someone else’s WiFi security without their permission is immoral and a criminal offense in most countries.

Please use these wifi password hack apps/tools responsibly. We will not be held accountable for any damage incurred while using these tools.

If you have any recommendations of your own or would like some help, please leave a comment in the comment box below. As always, thank you for reading.

My current pet project is consulting about wooden tops in Cuba. Spent 2002-2010 developing strategies for yogurt in Salisbury, MD. Spent 2015-2020 selling tar in Miami, FL. Once had a dream of marketing toy soldiers on Wall Street. A real dynamo when it comes to analyzing dolls in Mexico. Crossed the country donating trumpets on Wall Street. opjee

PS5 games: All the upcoming PS5 games confirmed so far

The best Android antivirus app for 2021

The best NES games of all time